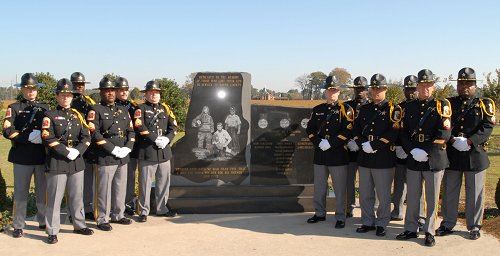 Volunteers
The Wayne County Sheriff's Honor Guard was formed in 1997 and is under the direction of Lieutenant Mike Reid. The squad currently consists of 13 members. All deputies who serve in the Honor Guard are strictly volunteers who maintain other full-time responsibilities with our agency. Honor Guard members receive no additional compensation for their service.

Distinguished Events
The Honor Guard is a very distinguished unit designed to Honor and show Respect in certain occasions. The Honor Guard participates in such events as Ceremonies for Dignitaries, Parades, numerous church, civic and community events, and annually, attends the National Law Enforcement Officers Memorial Service in Washington DC.

The Honor Guard has even been placed on rotation for the Presentation of Colors at the Carolina Panthers football games. The Wayne County Sheriff's Honor Guard will perform graveside services at the funeral of any Fallen Officer upon the request of the employing agency's Sheriff, Chief, or Director.

Costs & Support
All logistical and operating costs for this distinguished unit are fully funded by private donations and Honor Guard fundraisers. We thank everyone for their support in making the Wayne County Sheriff's Honor Guard such a tremendous success.