History of the Sheriff

The Sheriff is an elected county official who is the county's chief law enforcement officer. In North Carolina, the position of Sheriff is incorporated in the state's Constitution under Article VII, Section 2. However, the majority of the county's Sheriff's Powers are derived from English Common Law.

Historically, the beginnings of the Powers of the Sheriff began in Anglo-Saxon England prior to the Viking and Norman invasions. Anglo-Saxon communities were organized in groups of ten. Towns, or as they were called by the Anglo-Saxons, Tuns, were divided into family groups of ten, called a Tithing. Each Tithing elected a leader, referred to as a Tithingman. These groups of Tithings were then grouped together in tens and elected a leader too, called a Gerefa, which later became the title, Reeve. This was one of the earliest forms of self-government by "the People."

Alfred the Great (AD 871-901), King of the Anglo-Saxons during the Viking invasion, organized the lands and Tuns into Shires and appointed a Reeve to maintain law and order within the Shire. To distinguish between the two Reeves, the more important official was referred to as the Shire-Reeve.
Although Reeves and Shire Reeves were tasked with maintaining law and good order, the King and leaders expected everyone to "keep the peace." Each person had a duty to not only obey the laws, but to catch law breakers and bring them before the court or the Reeves. Citizens that saw someone commit a crime would "hue and cry,” summoning fellow citizens to assist in the apprehension of a criminal who has been witnessed in the act of breaking the law. Thus the common law principle, the power of Posse Commitatus, was established for the Sheriff.

The Power of Kings & Nobles
As time passed, kings and noblemen, assumed more and more power over government. Soon, the people of the Tuns and Shires lost even the power of electing their own leaders. The King and his nobles would appoint their own Reeves.

In 1066, William of Normandy, invaded Anglo-Saxon England and defeated the Saxon King Harold at the Battle of Hastings. After this the Normans centralized all powers of government under the King and his nobles. Thus the king would appoint his own Sheriffs, and in other areas that he had given governance to Nobles, they would appoint their own Sheriffs too.

Additional Duties Given to Sheriffs
In AD 1085, appointed Sheriffs were given the additional duty of collecting the King's taxes by King William the Conqueror, and by AD 1116, King Henry I, tasked the Office of Sheriff with the power to investigate and arrest criminals for violation of the new codified Laws.

Magna Carta
Over the next hundred years, more and more power was centralized under the Crown, until even the nobles themselves rebelled. In AD 1215, King John was forced to recognize basic Rights and Freedoms by signing the Magna Carta, a precursor to our United States Constitution. The Magna Carta, a document securing Rights and Freedoms, mentions the office of Sheriff no less than nine times signifying its importance. By the 1300s, the powers of the Sheriff included not only being the chief executive, administrator, and tax collector, but also a judge and leader of the local militia of the county.

Sheriff Not a Desirable Position
During the next two hundred years, the Sheriff was still responsible for maintaining law and order, collecting the King's taxes, but additionally had to serve as a type of ambassador for visiting dignitaries. Although the Sheriff was an important office, few sought it. If the Sheriff didn't collect the required amount of taxes, he had to make up the difference out of his own wealth.

As for playing the part of the host, the Sheriff had to personally provide lavish entertainment for his guests. Many capable and experienced men quietly attempted to avoid holding the office. However, if chosen, one had a duty to serve!
English Colonies
The Office of Sheriff was exported to English Colonies, beginning first in Virginia. Prior to the establishment of the Office of Sheriff in America, Provost Marshalls and Marshalls, under command of the British military, were the only law enforcement presence in the colonies. However, with the growth of the colonies, it soon became a necessity to establish political subdivisions for governance.

Thus, in Virginia, the Colony was divided into Shires and the Shire or County form of government was adopted, including the establishment of the Sheriff. 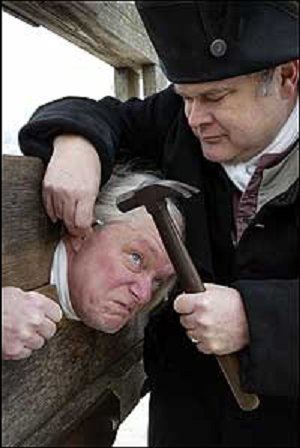